With a top half finish still achievable, Accrington Stanley manager John Coleman is hoping that his side can sign off on a high when they travel to relegation-threatened AFC Wimbledon on Saturday.

Following Colby Bishop's brace during last weekend's 2-1 win over Lincoln City, the Reds are currently a point behind 12th-placed Charlton Athletic in the Sky Bet League One table.

This Saturday's hosts come into the game three points from safety and will be requiring other results to go in their favour, as well as securing victory themselves at The Cherry Red Records Stadium.

Both Fleetwood Town and Gillingham would have to lose and there be an eight-goal swing if Mark Bowen's side, who haven't won since defeating Stanley at the start of December, are to survive in the third tier.

Here are the highlights from Coley's pre-match interview:

"The big thing we've got to learn from this season is that we've got to defend better and I think the element that has to improve is concentration because player for player, we have got good defenders who do defend well.

"They just don't defend for the 98 or 99 minutes that we need on a Saturday, we've conceded too many goals and our focus next year has definitely got to be not to concede as many."

Coley on his squad...

"It would be churlish of me to try and predict the future because I don't know what will happen.

"I'm amazed that there's a couple of our players that I haven't had enquiries about, that's not because I want them to go but I just think they're good players.

"Having Joe Pritchard back will be like signing a new player and a big player at that. We've also got the younger lads who've had a year with us, or half a year in Korede Adedoyin's case."

Coley on the final game...

"They won't have given up hope, a 3-0 win against us and you don't know what happens in the other games. Not so long back, they came here and won by four or five and the last time they won was against us.

"It was a pity Toby Savin getting sent off on Saturday because I think that could have been a real celebration. We were odds on to get a third goal and then the floodgates could have opened.

"As it was, we didn't and we ended up limping over the line but it'd be nice to finish the season with another win and get our points tally a bit more respectable."

"I've been in them situations where you just don't know where your next win is coming from.

"I feel very, very sorry for Wimbledon because they must have took the lead in at least seven of their last 12 games and you just feel as though everything conspires against you to stop you winning.

"What is remarkable is that they're still not down. I wish I was competing at the other end because the other end's going to be really exciting and hopefully one day we will be."

"He's a great kid and he showed no nerves when he came on on Saturday. It was a tough environment to come into and I think he handled it really well."

The full pre-match interview with John Coleman is available to watch on the club's official YouTube channel, CLICK HERE to find out more!

INTERVIEW: Coley's reaction on the win over AFC Wimbledon

INTERVIEW: Bishop's reaction on the win over Lincoln 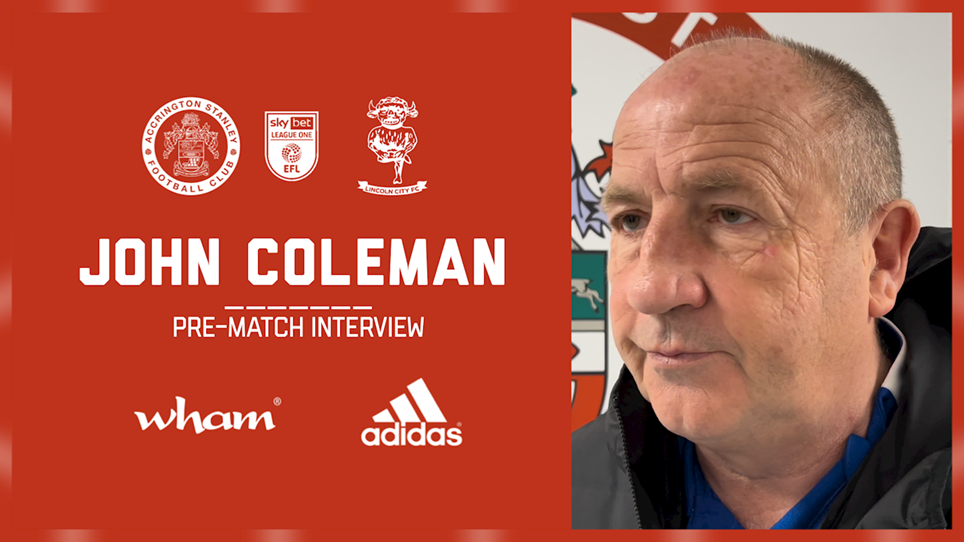 
It’s the final home game of the 2021/22 season with 18th placed Lincoln City the visitors to the Wham Stadium.