With a packed crowd at the Wham Stadium, it was the visitors who took an early lead through Daryl Murphy, with Josh Earl then bringing down Dion Charles inside the penalty area and receiving a red card for his challenge.

Bishop converted the resulting penalty, with the striker then adding a second goal as he superbly headed the ball past Remi Matthews in the Bolton goal.

John Coleman's side grabbed a third before the break through McConville, and the winger made it four shortly after the half-time break.

Charles then added a fifth with substitute Zanzala grabbing a late brace to secure the impressive win.

Keith Hill's side couldn't have had a better start to the game as the ball fell nicely for Murphy inside the box and the Irishman smashed it past Dimitar Evtimov and into the back of the net.

However, Stanley came to life after conceding with Jordan Clark sending the ball into the box towards Bishop, but the striker failed to direct his header on target.

The Reds were awarded a penalty when Charles was brought down by Earl, with the defender receiving a straight red card and Bishop stepped up to grab his eighth goal of the season.

Stanley continued to pile on the pressure after the goal, with Ross Sykes then unfortunately hitting the woodwork with a header.

Bishop grabbed his second goal of the game on 27 minutes as Seamus Conneely sent a superb cross into the box and Bishop headed the ball past Matthews to grab a second goal for the Reds.

Stanley had a third on 33 minutes as Charles sent the ball into the box and McConville fired it past Matthews to grab his first league goal of the season.

The fourth goal of the game for Stanley came early into the second half when Clark took the ball past Matthews and squared it for McConville to grab his second goal of the game.

Coleman's side grabbed a fifth with 15 minutes left to play when Charles fired the ball into the back of the net from inside the box.

The striker then turned provider as he squared the ball for Zanzala to grab a sixth, with the latter then making it in seven from close range in additional time.

Existing loyalty cardholders that want a seated ticket for Accrington Stanley's game with Bolton Wanderers are urged to pre-purchase tickets as soon as possible, with less than 50 seated tickets remaining.

The game is set to be played on Saturday 23rd November, 3pm kick-off, and this fixture is expected to sell out!

With a loyalty card, tickets for this game are priced at:

The Redz Bar marquee will be open for both Stanley and Wanderers supporters to share a beer, a burger and live music in a heated marquee, with pints available for £2.50 between 12pm-2pm.

Please note that hospitality is sold out for this game.

What is a loyalty card?

Can't make every game? Why not sign up to our loyalty card scheme for a one-off payment of £20 and receive £5 discount off your match day ticket, CLICK HERE to find out more! 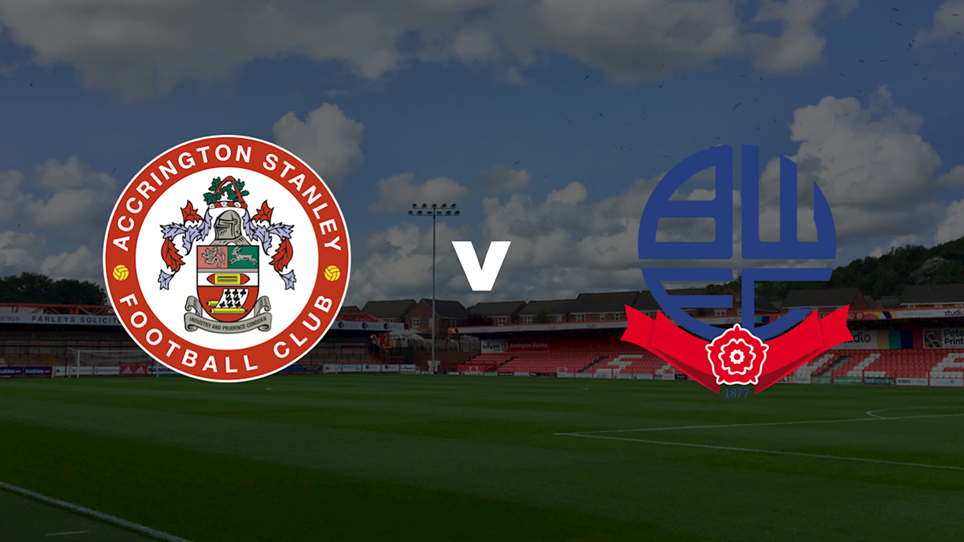 Get your Bolton tickets as soon as possible


Existing loyalty cardholders that want a seated ticket for Accrington Stanley's game with Bolton Wanderers are urged to pre-purchase tickets as soon as possible, with less than 200 seated tickets...

Ticket information ahead of Bolton game


Accrington Stanley season ticket holders will be able to purchase extra match tickets for the visit of Bolton Wanderers on Saturday 23rd November, 3pm kick-off, in advance from 11am on Saturday 26th...