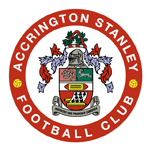 Are you sure you want to delete this event?

Goals from Josh Woods, Matty Carson and Leslie Adekoya saw Accrington Stanley Under-23s to a 3-0 win over Clitheroe in their first 2022/23 pre-season friendly.

Stanley began the match at Shawbridge on the front foot, with Woods dragging an effort wide of the far post on eight minutes.

The game's first shot on target then came via Carson, but he was denied superbly by Chris Thompson.

Woods, who made three first team appearances last season, broke the deadlock just before the half-hour mark; the striker calmly finishing past Thompson after being played through on goal by Trialist C.

The Reds then doubled their lead six minutes before the break, as Carson fired home at the back post from an Oliver Patrick cross.

Both teams made a raft of changes during the second half, with Billy Priestley's men also hitting a free-kick against the woodwork.

Substitute Adekoya then added a third goal in the closing stages; the 18-year-old slotting the ball into the back of the net.

Next up for Ged Brannan's side is an away friendly at Glossop North End on Tuesday 12th July, followed by pre-season trips to Bootle and Prescot Cables.