Accrington Stanley manager John Coleman will be hoping his side can return to winning ways when they face Rotherham United at the AESSEAL New York Stadium tomorrow afternoon, 3pm kick-off.

The Reds come into the game on the back of a 2-0 home defeat to Crewe Alexandra in the Emirates FA Cup, but Coleman's side secured an away point in a 0-0 draw with Coventry City in their last league outing.

Rotherham suffered a 3-0 defeat on Tuesday night to Lincoln City in the Leasing.com Trophy, with The Millers securing a 3-0 away victory over Gillingham in their last league game.

In the dugout for Rotherham is Paul Warne, who has spent 18 of the last 22 seasons at the club as either a player, coach, or manager. 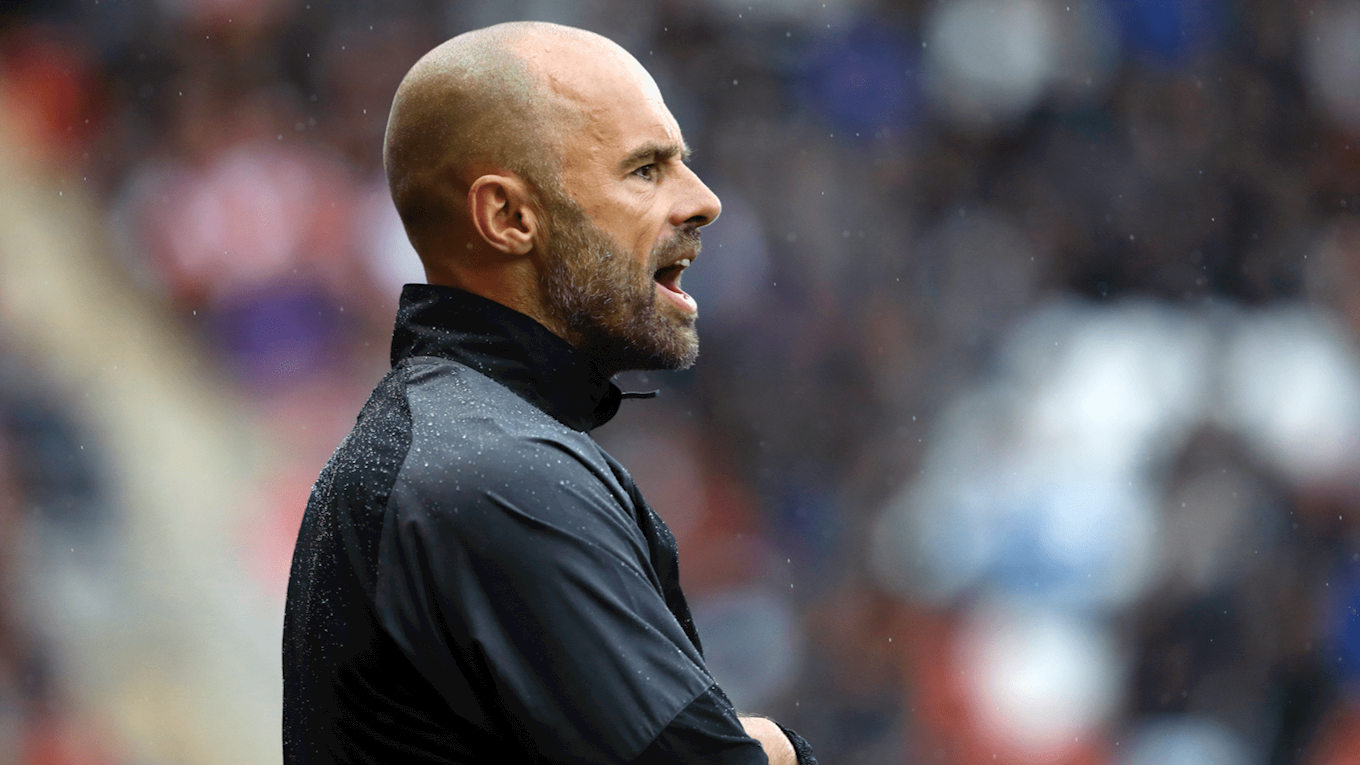 The Millers currently sit 10th in the Sky Bet League One table, with Stanley sitting in 19th place.

The two sides have met each other on 13 occasions, with Stanley winning two of those games and Rotherham winning eight.

Michael Ihiekwe - A familiar face to Stanley fans, Ihiekwe spent the first half of last season on loan at the Wham Stadium from Rotherham United. During his loan spell with the Reds, the defender made 23 appearances and scored his only goal for the club in a 1-1 home draw with Portsmouth. The 26-year-old has featured for The Millers on 68 occasions, with 18 of those appearances coming this season. Ihiekwe has also played for Cheltenham Town and Tranmere Rovers, with the defender making over 100 appearances for the latter.

Matt Crooks - Another former Stanley player, Crooks initially joined the club on loan from Huddersfield Town before his move was made permanent in February 2015. The defensive midfielder made a total of 53 appearances for the Reds, with the 25-year-old grabbing his name on the scoresheet on eight occasions. Crooks then spent time with Rangers, Scunthorpe United and Northampton Town, before he joined Rotherham United in January 2019. The Leeds-born midfielder is in very impressive form, having grabbed seven goals in his last seven games.

Freddie Ladapo - Despite being just 26-years-old, Ladapo has already featured for 16 different clubs during his career. The striker signed for Rotherham United in June 2019 for what was a record transfer fee for The Millers, after grabbing 19 goals in 49 games for Plymouth Argyle. The Romford-born striker has found the net on five occasions this season, including a brace in a 6-1 victory over Bolton Wanderers in September. 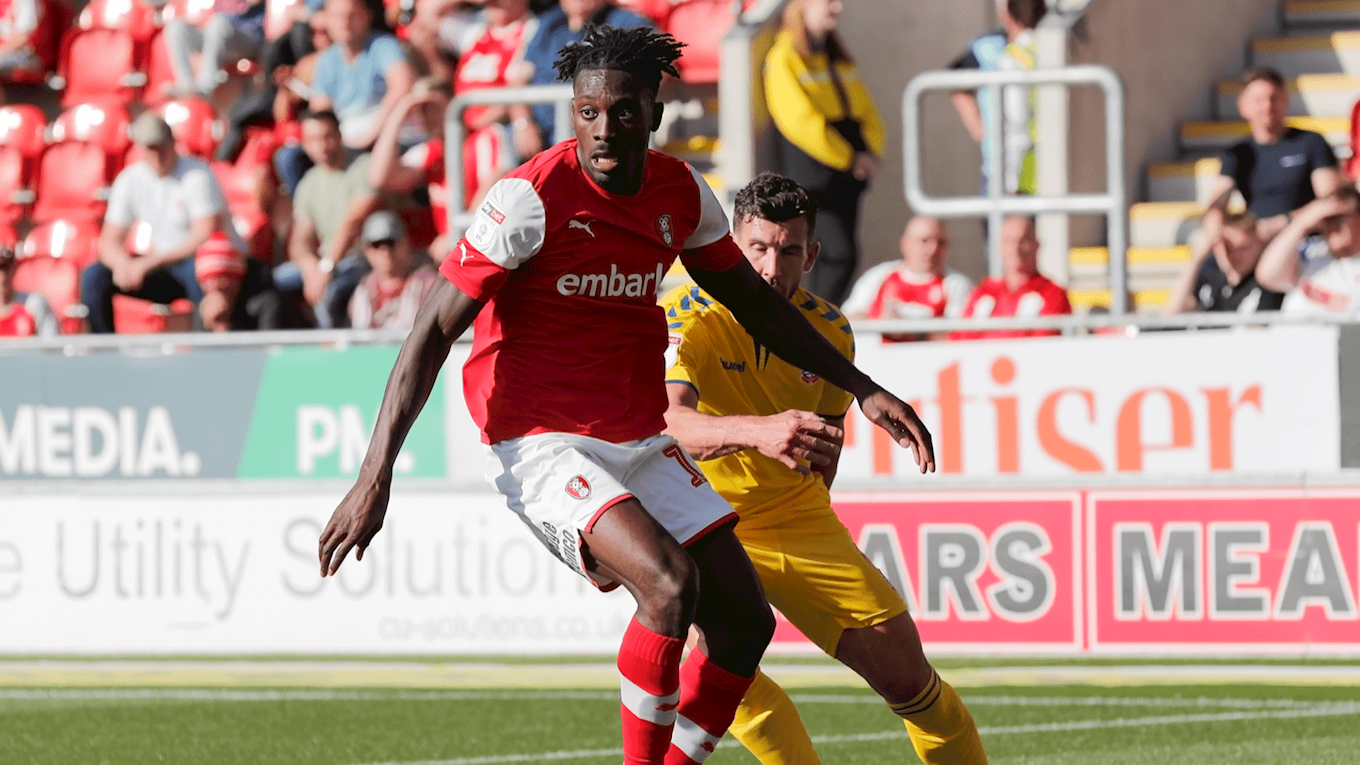 Following his red card in the defeat to Crewe Alexandra, Stanley will be without Mark Hughes for this Saturday's game, with the experienced defender having featured in the last 137 league games.

Zaine Francis-Angol is still missing through injury, with loanee Courtney Baker-Richardson also set to miss out having re-aggravated a previous thigh injury.

Defender Callum Johnson says that spirits are still high within the Stanley camp as they go on the hunt for a first Sky Bet League One win in four games.

"No one likes getting beat but we have to keep spirits as high as we can, you obviously enjoy it a lot more when you are winning games and that's what we have to get back to."

Tickets for the match at the AESSEAL New York Stadium are now not available from the club shop, but supporters travelling to Rotherham without a ticket will be able to pay on the day, CLICK HERE for ticket prices!

Stanley will be wearing their away kit for Saturday's Sky Bet League One game at the AESSEAL New York Stadium, CLICK HERE to buy yours!

If you're unable to make the trip to Rotherham, then you can listen to live audio commentary on iFollow Stanley for just £2.50.

A first half goal from Carlton Morris was enough to give 10-men Rotherham all three points against Stanley.

Morris, on loan from Norwich, headed home on the half hour while the Millers had Chiedozie Ogbene sent off eight minutes from time.

Despite piling on the pressure and several goalmouth scrambles, the Reds couldn’t grab an equaliser and it was agony for John Coleman’s men who have now gone four league games without a win.

Rotherham, relegated from the Championship last season, started well and forced Dimi Evtimov into a strong save in the opening seconds from Morris.

Stanley grew into the game and launched a few breaks and set-pieces without testing keeper Daniel Iversen.

The match was even with chances limited until the Millers took the lead on 30 minutes.

They won a free kick on the right of the area, Ben Wiles fired it in and Morris was there to leap above the Stanley defence and head home.

Keeper Evtimov was then shown a yellow card after charging out and tackling former Red Matt Crooks and Rotherham’s Clark Robertson was also booked for a foul on Dion Charles as the game got heated.

Morris almost had a second on the stroke of half-time but his curling effort was just wide.

Coleman brought on winger Sean McConville at half-time as Stanley looked to get back in it.

The Reds were more of a threat after the break with Jordan Clark putting in a dangerous ball which no one was able to get on the end of while, at the back, Ross Sykes made a number of timely tackles.

Robertson glanced a header wide for the home side while, on 56 minutes, Stanley had a great chance through a McConville near post header from a Charles cross which took a deflection and was inches off-target.

Evtimov denied Wiles while Sam Finley was unlucky to see his strike sail just over the bar on 68 minutes and he had another long range blast just off-target four minutes later.

The game was finely balanced and striker Colby Bishop came on for the last 15 minutes.

Stanley had a one-man advantage for the last eight minutes as Rotherham were reduced to ten-men when winger Ogbene was sent off for a second bookable offence.

McConville was desperately unlucky to see a 20-yard strike go just wide and there was a goalmouth scramble near the end with Clark and Seamus Conneely having a go but unable to find a way through.

Charles also was narrowly off-target as Stanley were unable to grab an equaliser.

Tickets for Accrington Stanley's upcoming match with Rotherham United are still available and season ticket holders can purchase another ticket in advance for just £5.

Tickets for the game at The AESSEAL New York Stadium can be purchased from the club shop between 10am-4pm or over the phone on 01254 356950.

Season ticket holders can purchase another ticket in advance for just £5, with the additional ticket having to be at the equivalent age band or less.

Tickets will increase by £2 on match day, so supporters are encouraged to purchase their tickets in advance. 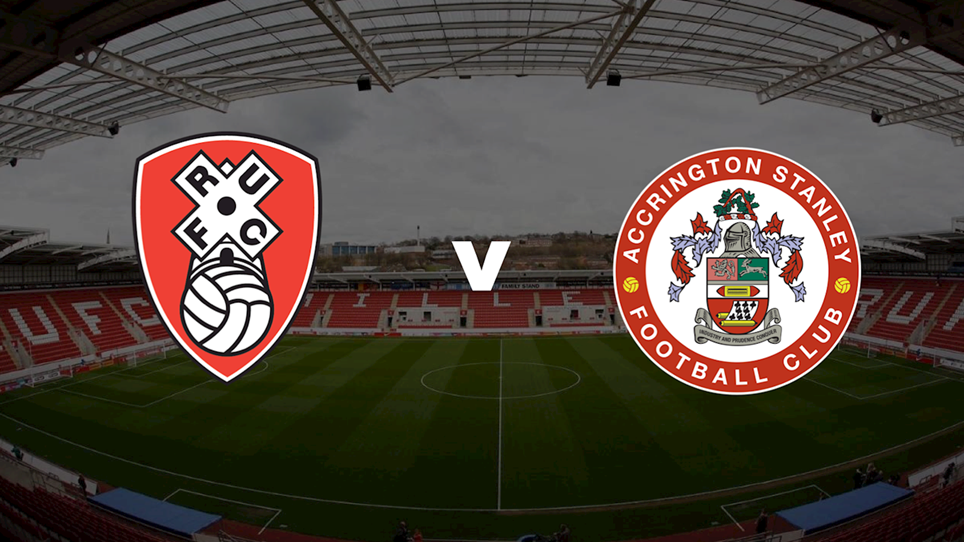